Decolonizing the Curriculum: Workshop at the University of Johannesburg 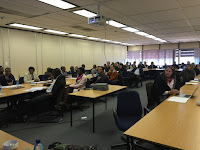 A successful workshop was held at the University of Johannesburg on 24 May 2016, on the subject of decolonizing the curriculum. There were over 60 attendees from eight of the nine faculties as well as members from the Academic Development Services and Academic Planning. A more detailed report is at the end of this posting and two slide presentations are posted below. The debate was lively and there was clearly a passion for the topic amongst many there, as well as a sense of lack of clarity from some quarters, about what we are doing, or about
how we understand colonization in the first place.  Cheryl Hendricks, chair of the decolonising the curriculum task team, gave a very useful lead-in presentation. Each faculty present shared what they are doing, and it is clear that there have been many discussions, some formal and some informal, about how to decolonize the curriculum. There were also examples of good practice, for example the need to engage in discussion with students in smaller groups, to give a greater variety of voices to emerge. Points made repeatedly were that this is not just about changing content, but about power relations as well. Many felt strongly that the issue of global competitiveness and chasing global rankings inhibits the decolonization process. Many of the colleagues also made the point that to decolonise the curriculum requires engagement with other role-players, especially the international professional  associations that have a strong influence on some of the more professionally-oriented programs, but in addition, with community members or workers.

An issue that was returned to many times in the morning, is that 'local' and 'contextual' applies just as much to engineering and accountancy as it does to the humanities, and some wonderful examples were given for example of how even something like a turnstile is typically designed with a certain prototype (white, male) in mind. The issue of race and color came up, with some saying that we should be prepared to talk hard and robustly with others, and others saying that referring to race makes it personal. We should be able to participate in robust debate and hear comments about the evils of the past and present institutioal practices, without taking them personally. Likewise there was a discussion about the fact that this is not an easy conversation, and one should be prepared for tension and contestation. The group were asked whether they think some kind of guiding document would be useful, and it was interesting that many participants indicated that this would be useful, although what exactly the shape such a document would take, is not clear, since there is a permanent tension between 'decolonizing' and unwittingly returning to colonising behaviour. In an interesting  presentation by Bongani Mashaba from academic development, he shared his own previous experiences as a student from Mpumalanga. He was affirming a point made by several students in previous forums at the university, that  much of the current unease from students is about a lack of recognition of who they are and what they experience. Further meetings at the University will be to generate a Charter, and views of this workshop were recorded to inform future processes.

Van rooyen decolonising the curriculum may 2016 from Brenda Leibowitz
Here is a more detailed report on the workshop, by Razia Mayet: