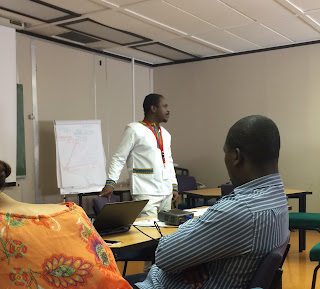 About Loïse Jeannin
Loïse is a postdoctoral researcher at the University of Johannesburg. Her topics of interest are inclusive education and professional development programs for university lecturers. She has taught in several universities in France and Thailand, and is now focusing on her research.
Posted by Unknown at 06:37 2 comments:

Leigh Patel’s book “Decolonizing Educational Research: From Ownership to Answerability” offers a decolonial critique of progressive social justice oriented approaches to educational research. Its argument hinges on the notion that ideas such as achievement, inclusion, access, opportunity, addressed by educational research remain very much aligned to the ideologies of settler colonialism.

Employing Bakhtinian notions of answerability she puts forward the notion that educational research must address itself to learning, context and knowledge. For her, decolonial theory offers a poignant way of achieving that. The decolonization approach is a powerful antidote to the moves to innocence that mask much of the interest embedded in liberally- minded research. Decolonial critiques create space for pause and reflection in social justice research. This enables us to ask critical questions about whom we are answerable to in our knowledge endeavours. For Patel, the mode of unreflective progressivism in educational research not only stymies reflection but “become [s] a vehicle for settler logics and heteropatriarchal racist capitalism”. This is unpacked by Patel in terms of the tendency of educational research to mine communities for data; to take advantage of social ills to promote a self-serving and self-sustaining interventionism, to focus-in on reforming deficient subjects and the tendency for progressive research to present knowledge in commodity terms as territory, human capital and private property.

For me, the book offers an especially trenchant critique of notions of epistemic access, a concept which is essentially hinged on unproblematised notions of private property and privilege. Here, following a settler logic, social justice research might run the risk of defeating its own ends. It stands to undermine the rights of indigenous, marginalised and oppressed people. Patel’s main point is that giving disenfranchised learners ‘access’ to powerful knowledge in order to close the achievement is not by any means a radical project. Patel urges her readers to ask questions about the assumptions that are often present in educational research. For instance she encourages us to ask why private property is the guiding but unseen metaphor that informs practices of inclusion. Why do certain groups of learners and students come into the dominated position in the first place, as subject for reform (in terms of what Paulo Freire might term “assitancialism”. Who defines educational achievement, what is worth accessing?

Preferring us to think in terms of educational debt rather than in terms of reform, the author suggests that what requires transformation is not the student but the system itself. It is the system itself that is in need of reforming. Patel asserts strongly that the genre of educational research is in itself a colonial construct complicit in the processes of domination.  Education must be seen as being in debt to those people it intentionally or unintentionally oppresses. Patel goes beyond this point by asserting that “educational research through both meaning and matter, has played a deleterious role in perpetuating and refreshing colonial relationships among people, practices and land”. In order to undo this role a relational approach to decolonising educational research is necessary, one that honours learning, context and knowledge.

The book, as a position piece, presents a cogent critique of the kind of social justice that is promoted by progressive liberalism in the United States. The American model of equal opportunity, closing achievement gaps and so on might feel somewhat lacking in topicality to a South African reader increasingly familiar with the more radical ideas of social justice linked to Marxism, Pan-Africanism, Fanonian thought, Freirian approaches to education and critical theory recently popularised by the student movement. However, that is not to say that the book is by any means irrelevant. Rather, as South African educational institutions do everything that they can to play a game of catch up with the so-called developed world in their pursuit of excellence and ever-increasing competitiveness, critiques such as those offered by Patel remain important.
Posted by Unknown at 08:43 12 comments: