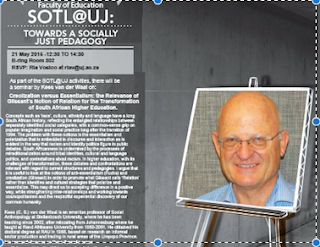 I had the privilege to ‘interview’ Andre during 2002, exploring the relation between social cohesion and human rights education when he was still at the SAHRC and busy with his doctoral study.  I have been following his publications since then around these topics and was very delighted to be able to attend this opportunity to hear him for the first time in a formal presentation.

He started his presentation by introducing the UFS Institute for Reconciliation and Social Justice where he is the Director since 2011, and presented the various themes, research areas and also mentioned the start of an interdisciplinary Master’s programme in Social Cohesion as of 2015.  For more details:  http://institute.ufs.ac.za

Andre reminded us about shared vulnerabilities on a social-economic grid; to continue the search for different possibilities of knowledge formation and transformation around themes of social cohesion, reconstruction and social justice, human rights etc., instead of just critiquing for the sake of it and to be able to do things differently as prescribed by the master narratives (e.g. capitalism & human rights).

He highlighted that any knowledge can be presented as transformative in the current curriculum by exploring for example its possible power base, privilege and hegemonic relations.

Andre also encouraged research on for example, the nature and function of Research Ethics Committees, who serve on it, what gets approved or not and why.

As his presentation is only the beginning of an ongoing series to develop dialogue around various themes, I am indeed looking forward attending them and reading the various articles he revered to in his talk when available, in particular to read more about the six sets of integrated economics, i.e.: material (benefits, rewards, reproduction of academic privileges), administrative (regulating powers, access, rules), socio-cultural (beliefs, customs), effective (job security, anxieties, fears, anger, AA), intellectual (access to games and rules), and politics (competing ideologies) in Higher Education.

Being at UJ for two and a half years now (as part of a 3yr contract), this has been the first seminar that was truly represented by people from many different departments and faculties!

Achille Mbembe on Rhodes Must Fall, Decolonization and the Pluriversity

Achille Mbembe from the Wits Institute for Social and Economic Research (Wiser) gave a series of talks   entitled "Decolonizing Knowledge and the Question of the Archive". My friend Viv Bozalek drew it to my attention. I think it is wonderful. Mbembe begins the talk  by referring to the Rhodes Must Fall campaign, and says that the need to remove statues of colonizers such as Cecil John Rhodes is obvious, and that what is surprising is that it did not happen earlier. He argues for a new kind of institution in which buildings and public spaces are decolonised, and where there is "democratisation of access". Here is one of my favorite sentences:

We need to reconcile a logic of indictment and a logic of self-affirmation, interruption and occupation.

- And relevant for our focus on a socially just pedagogy, he does on to say, "This requires the conscious constitution of a substantial amount of mental capital and the development of a set of pedagogies we should call pedagogies of presence". I will quote a bit more, rather than to cannibalise what he has written: "Another site of decolonization is the university classroom. We cannot keep teaching the way we have always taught. A number of our institutions are teaching obsolete forms of knowledge with obsolete pedagogies. Just as we decommission statues, we should decommission a lot of what passes for knowledge in our teaching. ... in order to set our institutions firmly on the path of future knowledges, we need to reinvent a classroom without walls in which we are all co-learners: a university that is capable of convening various publics in new forms of assemblies that become points of convergence of and platforms for the redistribution of different kinds of knowledges."

There is so much more in this very rich talk, about whiteness, decolonization of knowledge, a critique of africanization a la Fanon and Ngugi, epistemic diversity and the pluriversity. The PDF is available on the SOTL @ UJ dropbox folder, and the video of the talk is available in two parts on You Tube at: https://www.youtube.com/watch?v=g-lU4BCsL8w