What does it mean to be 'at home' at a university? - and how important is it? 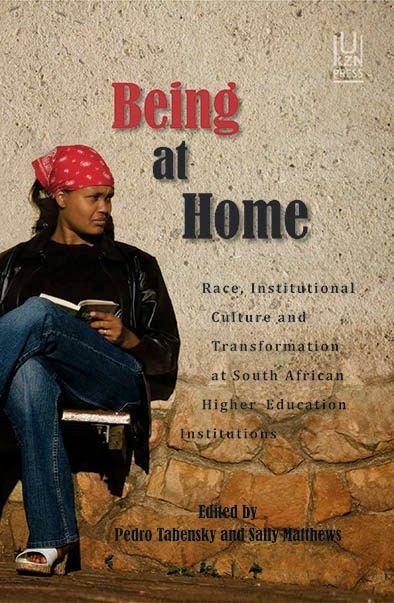 This evening I attended the launch of the book, Being at Home: Race, Institutional Culture and Transformation at South African Higher Education Institutions (Eds Pedro Tabensky and Sally Matthews) UKZN Press. The event was held at the University of Johannesburg Library. The panel, chaired by Eusebius McKaiser, consisted of Saleem Valley, Pedro Tabensky and Samantha Vice. There was an extremely large turnout, with a lot of students present, which made for an extremely exciting evening. I returned home rejuvenated.

Very briefly, the book deals with the ‘usual suspects’: race, culture and transformation in South African higher education institutions. I am very excited that my friend, Amanda Hlengwa, has a chapter in the book, ‘Employing safe bets: Reflections on attracting, developing and retaining the next generation of academics’.

What was nice about the event was that the panelists’ presentations were brief, leaving time for the very lively discussion that ensued, provoked, prompted and controlled by the ebullient Eusebius. Several interesting points of contention emerged. One of these was whether UJ was making an effort at transformation. Much to the consternation and disbelief of some of students, several UJ staff members said that UJ was making an effort, but granted, that there was much more to be done. One member of the audience said he had been dissatisfied in the old days that staff were retarding transformation. He has moved into two different units, and he remains dissatisfied that transformation is still being hindered. One colleague said that as far as disability was concerned, UJ had made far more progress than the four Western Cape universities that he was quite familiar with, and there were several nods of agreement.

There was quite a bit of discussion, with students and staff saying that they did not feel ‘at home’ at UJ, although they said that they felt even less at home at other higher education institutions. One student said she had attended Afrikaans junior and high schools, and that this is the first time, at university, that she had a glimpse of feeling ‘at home’. She asked a question that particularly appealed to Eusebius: what can we do to make these young white children interested in black students, culture and philosophy?

There was substantial discussion from the panellists and the audience about the curriculum, and why the present one does not contain enough contributions from Africa and South Africa. Samantha Vice said self critically, that this could be because the educators teach from the basis of what they were familiar with. However others contested this, saying that if newcomers to South Africa like Thaddeus Metz can throw a spotlight on Ubuntu and make a place for it in the curriculum, then so should South Africans be able to do so.

For me the take-home message was the question of what it means to feel ‘at home’. One speaker said that feeling at home was only part of the full set of conditions for social justice. Another made a distinction between feeling at home and homeliness, saying that much of the unhomeliness occurs at home: domestic violence, for example. Eusebius McKaiser said that all his life as a coloured, gay male, he has felt not at home, and that this spurred him on to learn. Samantha Vice, however, felt that in order to take risks and be critical, one needs a minimum level of safety and feeling at home. She has a point, but nonetheless: for learning to occur one should not feel too comfortable, and being a student must involve a degree of strangeness and discomfort. I am sure the actual book has far deeper and more considered treatments of the topic than the simplistic rendering I've provided here, which is why I'd advise people to buy the book - for R320. I plan to read my copy.

Some worthwhile questions for our SOTL @ UJ project:

What does feeling ‘at home’ in a classroom mean?
What is the relationship between pedagogy, epistemology and identity?
Are there maximum recommended levels of comfort or discomfort, for learning to occur?
For maximum participation and engagement in knowledge practices, is ‘feeling at home’ a minimum or sufficient condition? What else is required for maximum participation in teaching and learning to occur?

Email ThisBlogThis!Share to TwitterShare to FacebookShare to Pinterest
Labels: 'Being at home'; transformation; race; teaching and learning; higher education; university of johannesburg